Trust and Results- We are Tohto Suisan of the Toyosu Market.

Building trust and showing results, Tohto Suisan has more than 80 years of experience in providing people with the great bounty of the ocean. 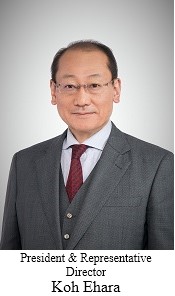 Japan boasts one of the world’s richest cultures of fish food. We have lived with and benefited from the rich bounty of the ocean since ancient times. Eating fish is an important part of the Japanese culture and is deeply rooted in the hearts of the Japanese people. It is our duty to pass this tradition down to the next generation in a style that is true to the realities of today.

Tohto Suisan was established at the beginning of the Taisho era when the founder, Tatsuzou Taguchi, became an independent fish wholesaler at Nihonbashi Uogashi, which was known as the “kitchen of the Edo shogunate” and the predecessor of today’s Tsukiji Market. When Tsukiji Market opened in 1935 (Showa 10), he established the seafood wholesale company Tokyo Uoichiba, and after merging into a statutory company during the war, Tohto Suisan was established in 1948 (Showa 23) at Tsukiji Market. Since then, the company was licensed by the Ministry of Agriculture, Forestry, and Fisheries and the Tokyo metropolitan government to operate as a wholesaler, bringing food to dinner tables in the Kanto region centered around Tokyo. With the support of many people in the marine industry, we worked to provide a stable supply of fresh and frozen seafood, as well as all types of processed marine foods collected from regions throughout Japan and around the world. At the Tokyo Metropolitan Central Wholesale Market, we play a central role in transactions of marine products, supply high-quality seafood at fair prices, and have grown as a company in support of the healthy eating habits and widely contributing to society. You can say that our history is synonymous with the history of the distribution of marine products after the Second World War.

Tsukiji Market has been open for more than 80 years, and the market for and distribution of marine products are changing dramatically. Japan was once a major fishing power, but in recent years, its momentum is gradually passing away—the domestic consumption of fish is declining because of the global increase in fish consumption, an aging society, and the diversification of diets.(We moved to Toyosu market on October 11, 2018.)

Tohto Suisan considers changes in the distribution structure of Japan that has entered a mature society as a next step. By leveraging our more than 80 years of experience and the extensive domestic and overseas networks of the Tohto Suisan Group to propose products based on marketing that accurately grasps the needs of consumers, we will play a role in the evolving distribution of marine products while working to create a new fish food culture as a corporate group specializing in marine products. We will reach out to the world with a focus on Asia. As Tohto Suisan will continue to challenge, we wish you will look at our performance.